Transatlantique Kriek is a beer that is very special to me. Not just because of my secret New Belgium crush that no one knows about, but the fact that this is the first of three beers that SWMBO actually likes! I picked up a bottle of it in 2010, or 2011, just because it was a Lips Of Faith beer and I had to collect them all.

Back then I tried to make her taste everything I bought just because I was hoping to share my obsession with her. I was certain she would hate it but after one sip, she was like "Pour me a glass of this one." Woot!!! Win!!! We went back to the bottle shop the next day and bought all the remaining bottles off the shelf. I refrained from drinking much just so she could enjoy it. Fast Forward to February 1st, 2013.

Ok, so we can actually go a little past that. I was not in Colorado, so I was not able to go to the launch event. Though, you know I so would have been there if possible. But once this beer got to North Carolina, February 18th, I made a mighty big beer run to get some of the good stuff. Yes, the day it was released! I did not want to risk any of it selling out! I even picked up that Folly Pack that I searched for at every store within a 20 mile radius. It sucked I had to travel so far to find that simple little pack but now I have it... Until the other ones are released later this year... 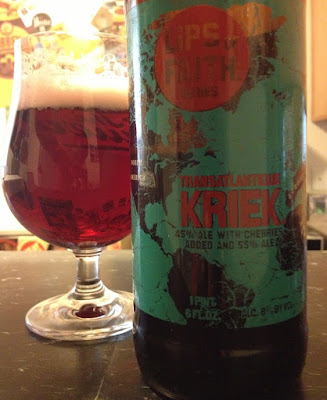 Of course when I opened up this bottle, SWMBO got the first pour and most of the bottle. I even let her have the first taste... mainly because I was jotting down my appearance notes, but that is besides the point. After reading the side of the bottle, she was actually worried about drinking this beer. She asked me, "What if I only liked this one when it is aged?"

Two Continents, One Beer. We partnered up with Frank Boon's Brewery in Belgium back in 2003 to create a unique Kriek with A Tart Cherry Nose and A Pleasingly Sour Finish. Lucky for all, We Did It Again! Travel to NewBelgium.com

Fair question based on this short description. I told her it was fine and we bought enough bottles to age for quite some time. The Verdict: It was not the same beer she fell in love with. She was able to continue drinking it but does not want to open another bottle for at least one year. My thoughts: A different beer, for sure. Though, that should not discourage anybody.

Transatlatique Kriek looks like a fine wine. A beautiful Blood Red color or even reminiscent of Cranberry Juice. Pours a big pink head that is just amazing to look at. Sour cherries and some funk on the nose. It does smell pretty fresh and young right now. The scents are so vibrant and not subdued at all.

First sips of this one are tangy, musty, a little tart in the finish and you pick up a dryness you would expect if you were eating nothing but cherry skins. Of course the cherry flavor comes along with that. The carbonation dances all over your tongue but it seems to have a low carb level. Figure that one out.

I honestly did prefer the batch that we got from 2010 as well. I mean, I really enjoyed this one and I wonder what or if anything will happen to this beer over time, but it is different than before. I asked them about it on twitter and got a response that makes perfect sense.

@l_allenh No recipe changes. The blending beer from Boon is a Kriek, differences in the cherries? And the aging never goes the same twice.

There you have it. I did not think of that at all but hey, that is part of what beer is about. I will still keep note of what happens over the life of these beers.