If you think my love affair for New Belgium is a joke, take a look at my twitter profile, (not on a mobile device), a Flanders Red I brewed in "La Folie" style, and maybe even the shrine above my home bar. It is going to suck when I have to take it all down and move... Maybe I should buy a giant poster board? 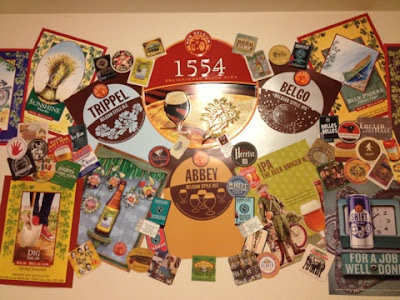 Though, today has brought my attention to one of the newer beers in their regular line up. Actually, to date it is the newest. Though, they have a few changes for seasonal ales this year. Shift.

Shift is part of the "Explore Series" and it is classified as a Pale Lager, clocking in at 5.0% abv. I first had it after its release, would you expect anything else? At that time did not really know what to think about it. My short notes on Untappd read,

I really don't know how to figure this. Creamy.... Grainy... A tad spice? Lemon.lawnmower beer.

Since then I had it a few more times and my impressions on it changed quite a bit. I had it out of the can then as well. The place I got it was not really well suited for drinking in anything but plastic or its vessel of transport. Did they change anything? Was the beer just really green since I had it right after it was released? I do not know. I gave it a 3/5 then. One of the things I love about the poster above my bar is that it shows the beer is actual size!

Though, the poster brings other things to my attention. I tweeted New Belgium about it before and got no response... I tweet them quite a bit so it is probably just annoying. But with the plans of the new brewery and the little things I noticed in the poster... I really got to thinking...

It looks like it says "Raleigh NC". Was Raleigh one of the original places they planned to open the brewery? Was it "official" but things fell apart after making the poster but they just never changed it? What about Raleigh should I know in regards to New Belgium? Maybe nothing. But I would expect the poster to say "Asheville NC". That only makes sense, right?

Shift is a really bright and clean beer. You will have a better time seeing through this than a pane of glass. Really clear, honey colored and it has a respectable white head. The nose is bready and sweet. There is a scent in there I can't really describe but I have smelled it before and a little fruity. This beer goes down really easily and there is a light bitterness. Crisp, lemon, grainy, and creamy again, like I said before. A nice malty body and some juicy fruits.

Overall, A lot better than the first few times. The proper serving of this beer, I would say is in a normal fridge. Not a beer fridge and out of the can probably. The colder temps and the can just make it seem more refreshing. It is not bad at 53f, but you know. I'm not allowed to keep beer in the regular fridge, so mine will not be moving. I like that they added a few IBUs to this beer but not too many to the point where it was just ridiculous. The can says best by 10 MAR 13 on the bottom. If BMC beers tasted like this, I never would have got into craft.

So, the pretzel in this picture... yeah, that's what it is. It was made using some spent grain but I think I am going to stop using it in certain things. Everything I make with it kind of reminds me of poop. Maybe if I make a really light style of beer it will be cool, or a bread. I can deal with brown bread. The waffles were not bad either. But, the dog treats and these pretzels... Yeah. I mean they taste fine, but look at them. If you want to give them a try, the recipe is posted on this blog. She even talks about how crazy I am. Damn...