This past weekend, Hop Man, made an Appearance at New Belgium's Tour de Fat. For those of you who don't know, Tour de Fat is essentially a Beer Carnival showcasing New Belgium, sustainability, and their lifestyle and culture when it comes to fun and bikes.


A celebration of bikes, beer and community in 12 U.S. cities spreading the good word about the radness of the mighty bicycle and a simple, honest way of living.

If you need a recap of why I would be interested in something like this... You have not been paying attention, but here you go. As soon as I got there I started scoping out the park trying to figure out my game plan for the day... Not that I really needed one. It was to only be about excitement and going with the flow and then I ran into this sign.

I guess this set the stage for what I was drinking anyway. I may or may not have been able to score my way into the VIP tent, Thank You Again! So it was cool just being around everyone that was there. I even left with some swag that will be going on many of rides with me. 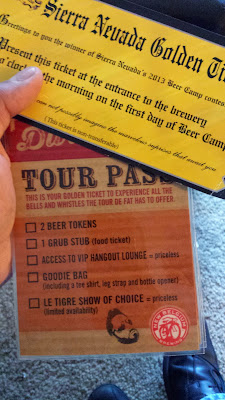 Of course I came dressed for the occasion, not that it should come as a surprise to you. But after the show, IT WAS TIME TO GET BEER!!!

Over the course of the day I tried everything that was available at the Lips of Faith tent. I didn't bother heading over to the other but they had Summer Helles over there. I highly recommend finding that on and trying it. Especially those of you who say you don't like lagers. This is one of the best beers I have had in a while and it even falls into the Light Lager category for those of you who always trash it. Just saying.

There are a few shows, and bands, I wish I would have caught but there were a lot of good people to talk and hangout with. Of course enjoy your company, but if you have the chance to show up to an event make sure you check out as much as possible. They put on a great show. I should have taken photos of the puppeteer. He did some pretty... interesting things that I did not even know were possible. Including a stripping puppet and Homer Simpson on the drums! Pretty epic.

There are a few more stops this year, so if you have the chance to get out to them, I suggest you do!

Now, I could not let you go without showing you what I wore, so you better show me up at the event that you go to!

Cheers!
Posted by Allen Huerta at 9:00 AM