So, it's unofficially official!!! I will be heading to Beer Camp this December!!!... Though, that last 12 hours or so was a real... how do I put this... lets just say I was scared like EFF!!!! We have come a long way since I first posted the announcement of my video.

I have so many people to thank for this and I cannot think of ways to thank you all enough! That last push to the finish was the key and I really am so appreciative!!! You have no idea! I guess I better put in my time off from work very soon. I hope that the official announcement comes quick!

But anyway, to celebrate (or get me through the last stressful hours of voting) I decided to drink a bottle of each of the currently released Beer Camp Beers! I wanted to do this sooner but I thought I might hold off a bit. Good thing I did! Check out my video below!!! Not like you haven't seen it already though...

The Best Beer In The World from L Allen Huerta on Vimeo.

I was disappointed by the fact that they were all essentially IPA's but I guess I can look past that as I am trying to think of ideas to pitch and collaborate with the other attendees. So, here we are starting with Beer Camp #93!

What better beer to do it with, too? Celebrator? That is TOO Perfect!!! Granted this IPA was not brewed for me, but hey. I can imagine.

A very floral, light piney nose on top of an awesomely crisp, clean copper body. A nice bubbly off white head with very distinct pine notes sticking to your throat and drying up on the finish. Some light juicy tropical notes, a bit of light sweetness and a light bready background but a very solid IPA overall. Made to the best standards and clocking in at 6.9% ABV. Not the beer I think about when going to Beer Camp, but this beer should be the definition of the style. Bravo!

I know one of the guys that was a part of this beer last year, OC Beer Blog as you might know him. He even used the tap handle in his car for a while as his gear shift! How bad ass is that? I love the name, too. Plus the label art is to die for! Sleight Of Hand. It only makes me wonder...

Honestly, this was my favorite of the bunch. And I am not just saying that. I just love the way the flavors all came together and at 8% ABV with 52 IBUs. A nice dark malt aroma and a bit charred and burnt. The first sip you get that roastiness with some nice Belgian fruitiness and a sharp hop bitterness. I feel it was more pronounced back when I first got this box but it is still very good. An amazing background on this beer. So full and flavorful. Dark Fruit, Dark Malt. I have never been into Belgian IPA's... though this one is a Belgian-Style Black IPA, but this one is fantastic!

This is a beer I know nothing about, but it was a creation of the last beer camp as well... well, the competition rather. Not the last beer camp. Blood Shot aka: What one would say about me if they saw my face right now.

At 8.5% and 95 IBUs (9.5% and 100 IBUs was the initial batch)the malty with a light spicy nose, that kind of reminds me of rye and a very distinct pine or... how do I put this aroma... I am not sure but it comes through in the taste too with a heavy sweetness and a strong bitter attack. Deep ruby color (my bad, the bottle says crimson) and an off white, amber tinted head. Some great flavors in there. Another very solid "IPA" out of this kit. I wonder what the future holds. 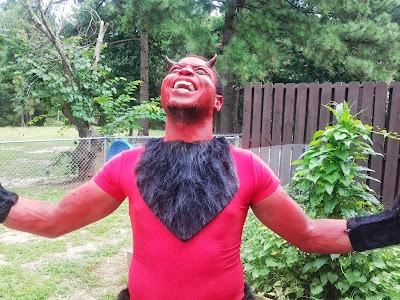 Cheers!
Posted by Allen Huerta at 6:51 AM