I recently had the first beer in the New Belgium Hop Kitchen Series and was excited to see the next one in their line up was so close to release. I was lucky to get my hands on this beer as fast as I did. Beer Drinker Rob over at Daily Beer Review got quite a sampling of beer from New Belgium as they are currently entering their market and sent me over a bottle.

I really owe him one... but that is because of another bottle he sent me. You will see about that one in due time... Just need to figure out when to crack it open. Back to French Aramis, they say you need to drink IPA's fresh, so I guess before it is officially released qualifies quite well, no? 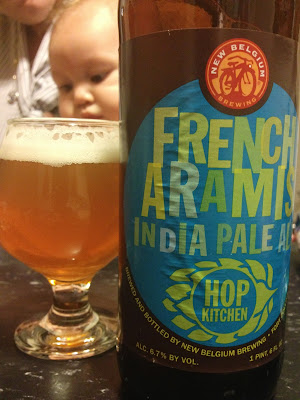 French Aramis poured pretty hazy and the gold color it gave off made it look a little milky in combination, with a fluffy white head. The nose was pretty light. That one threw me for a surprise, granted I have no idea what a French Aramis hop is like, so maybe this are all properly in place. Grassy and a little oniony... or something, maybe this is an herbal hop? The descriptions on the bottle lead me to believe that.

An interesting presence of bitterness, a light carbonation, a bit dry in the finish, lemon flavors and that onion I thought I picked up in the nose stuck with me, too. I thought this was an odd beer, I was not alone in my thoughts, though. I guess for now I wait for the next beers in the Lips Of Faith series and new Hop Kitchen releases.