The time is nearing and I figured I have to do everything I wanted to get done before I headed out. I know I would regret it otherwise. My first trip was City Tavern, I know I was just there, but I wanted to go again HAHA!) This may be a long post... I may break it into several.

This time the choices were a bit different. I had a Le Merle, (a Saison that I was trying to have a week before at Eureka Burger but they SOLD out as I was ordering it... O well. I was damn well worth the wait.), a Blonde and a Triple by Brouwerij West, (never heard of the company but they made a pretty good triple.) and then Witch's Wit, (a Lost Abbey beer that I did not know existed when I went to the Brewery).

Besides that though, I always forget to snap some pictures before I dig into my food! We were brought a very sweet tray with a grilled cheese sandwich on it :D and stuffed and fried squash, and an heirloom tomato. I really wish I got a picture of it. Again, I suck.

I had the City Tavern Brew Burger! for dinner. It is one of their signature burgers that is built on a Pretzel Bun, with an onion ring, a special pub cheese, and a mustard aioli... This burger was seriously a delight, I would honestly think so even if I were not obsessed with stuffing beef in my mouth and pretzels.... Maybe bacon and jalepenos would make this better but this would not be the same burger that they sell :p That would be my dream burger. Especailly if the Jalepenos were stuffed with cream cheese.......... YUM!

This was also my time to say goodbye to Bierkast :'( I hope all goes well for them in the future and that I can soon come back and drink their beer in a bar somewhere in LA. I am really looking forward to the future of LA Aleworks and hoping that I can come visit them and brew with them one day in the brewery. That would be awesome.

The next night my buddy Kyle wanted to go to 38 Degrees Alehouse and since this is one of the last time I knew I would see him in a while I could not say no ;p I am damn glad I did go too.

I was just being a doof and I called the restaurant to see if they had Cabernale on tap for Nikkee, which they did, and the guy who answered the phone was none other than the owner... Clay. I was pretty damn excited being I had always wanted to meet him since he ran a number of events around the city and owned this place, DUH! so as soon as we got there I started asking around for him. 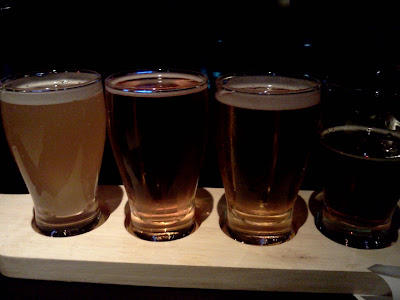 Got a little excited and drank before the picture :p

In the meantime, I drank a few beers I knew I liked, one I wanted to try, and one that just fell into my lap... Not really a fan of the Blue House Citra Pale. For some reason everyone wants Citra hops right now (at least that is what they tell me) but after having this beer I would not want to go out and buy any hops that had a similar taste to this. Heritage by Bear Republic, always a good choice. Not my favorite brew from this company, but then again I've only had four HAH!

Another brew that I had before that I knew I loved was the Abbey Grand Cru from New Belgium. The thing that sucked about this beer on this night is that, the server had entered all the beers for both mine and Kyles flights, but the bartenders did not process or print them seperatly... I HAD TO GUESS WHAT BEER WAS WHAT BASED ON COLOR!!!!!!!!!!! So, it was the Abbey or Cuvee Des Jacobins Rouge that I was down to and I had to drink...

I figured it out pretty quick but still... If I have never had either one of those beers before I would not know which one I loved and which one I do not know if I could drink more than just a taster of...

Pretty much about the time we were ready to leave, Clay finally showed up and Kyle talked his ear off ;) it was a good time and after he heard that I was heading out he gave me a bottle of the brand new Stone Collaboration brew, Cherry Chocolate Stout, (That I was obsessing over and trying to find a place that sold it since it was only 3 days old at the time). Oh My GEEEZZZ!!! I have yet to crack it open, but I will give it a special review. Believe that. I hope it lives up to the high hopes that I gave it knowing nothing about it.

Once again, I blame this on Kyle and his lack of visiting any bars in LA... I told him that Beer Belly was an awesome spot and that he had to see it. The night before they had a Deschutes Beer event that I was not able to attend. Black Butte XXIII was there and Conflux #2.

As soon as we got to the bar I got a Batch 300 from The Bruery. I have been going back and forth on buying a bottle of this but never made the jump. I am glad they had it on tap here but I would have been just as happy buying the bottle.... I LOVED IT! After this beer I asked for the Black Butte XXIII. Black Butte is already one of my favorite beers, but man... It just got better. Everything I loved about Black Butte was amplified and the oak aging really set it off.

I asked about the Conflux next but the keg had kicked just before we got there. It was getting pretty late by this time anyway but I noticed a LadyFace growler in HopHeadJims cellar so I decided to ask what it was... I had no idea that LadyFace made Mead. He asked us if we wanted to try some, so we did and OMG! It was damn good (it was my very first mead as well). It clocked in at about 15% and I guess that is kind of high, but I really have no idea. I am kind of on the hunt for more meads now.
Posted by Allen Huerta at 2:35 AM